Cause and Effect Example Paragraphs

10 Example Paragraphs of Cause and Effect

1. There are many theories about why the dinosaurs vanished from the planet. One theory that many people believe is that a gigantic meteorite smashed into the Earth. Scientists believe that the meteorite was very big and that the impact may have produced a large dust cloud that covered the Earth for many years. The dust cloud may have caused plants to not receive sunlight and the large plant eaters, or herbivores, may have died off, followed by the large meat eaters, or carnivores. This theory may or may not be true, but it is one explanation as to why these giant reptiles no longer inhabit the Earth. 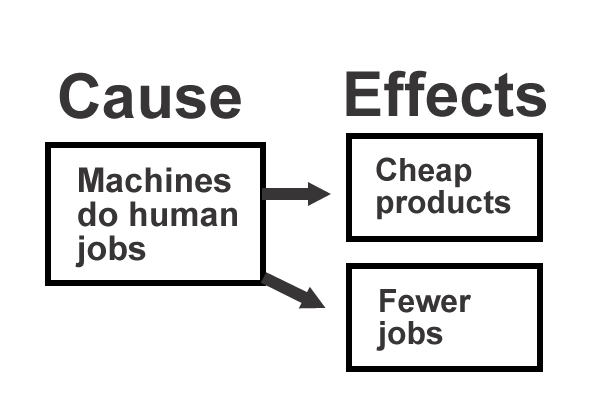 A graphic organizer showing information from the second example.

5. A mute is an object that is fitted to the end of a brass instrument to change the instrument’s sound and tone. Mutes can be made from many materials but aluminum, brass, and copper are common. A mute works by changing the shape of the instrument and absorbing its acoustic vibrations. This causes the instrument to produce a sharp, damp sound. Mutes are often used in jazz music but sometimes they are called for in other compositions as well.

6. Thomas Edison became known as “The Wizard of Menlo Park” in 1877, when he invented the phonograph. Edison’s phonograph allowed people to record sounds and replay them. Though this technology was unimpressive by today’s standards—his recordings would only play few times and the sound quality was poor— back then Edison’s device appeared to be magical. That’s why people called Edison “The Wizard of Menlo Park,” because they suspected him of witchcraft.

7. Have you ever had an ice-cream headache? That’s when a painful sensation resonates in your head after eating something cold (usually ice-cream) on a hot day. This pain is produced by the dilation of a nerve center in the roof of your mouth. The nerve center is overreacting to the cold by trying to heat your brain. Ice-cream headaches have turned many smiles to frowns.

8. Under no circumstances will firecrackers be allowed in school. They are not educational and they are dangerous. Any student caught with firecrackers will receive a ten-day suspension. If you see any student possessing firecrackers, report them to the principal immediately or you will receive a suspension as well. Exercise good judgment or face the consequences. You have been warned. Now let’s have a great school year.

9. Look down at your feet. Are you wearing shoes? Why? People wear shoes many reasons. The first and most important reason is to protect their feet. Shoes keep people from hurting their feet while walking on rough surfaces, but this isn’t the only reason why people wear shoes. Some people wear special shoes that are designed to help them play a game, like bowling shoes or soccer cleats. Some people wear expensive designer shoes so that they appear fashionable and feel good about themselves. And a lot of other people like my dad wear shoes so that their feet won’t stink up the room.

10. Being involved in after school sports and clubs is not a right. It is a privilege. Therefore, students have to meet eligibility requirements. If students have any “D”s or “F”s, they are not allowed to play. Also, if students have behavior issues in class, they cannot be on the team or in the club. Lastly, students need to keep good attendance. If students miss school, they most certainly cannot come to practice. Being on a team is a lot of responsibility. If students are not proving to be responsible, they will not be permitted to be in clubs or teams

I hope these example paragraphs help. Check out these other great cause and effect and text structure resources: