Skip to the worksheets and activities

Understanding subjects and predicates is fundamental to learning sentence structure. Without a working knowledge of subjects, predicates, and objects, one can never master the rules of punctuation. This page will clearly explain subjects, predicates, and objects and then offer free worksheets and activities to help you review. Every complete sentence must have at least two components: a thing and an action. When we are discussing parts of speech, we call these a noun and a verb; however, when we discuss sentence structure, we call them a subject and a predicate.

Subjects
The noun in the sentence or clause that takes action.

Examples
John went to the store. It was hot outside.

In the first example sentence, the action is went. Ask yourself, "Who went?" Since John went, John is the subject.

The predicate in the second sentence is was. So we ask ourselves, "What was?" In this case the subject is it.

Predicates
Actions in the clause or sentence

Action verbs are pretty easy to identify, but many students have a difficult time identifying verbs of being (am, is, are, was, were...) as predicates. The only way to improve in this regard is to study verbs, verb phrases, and gerunds. A sentence can have one predicate or many, but every grammatically complete sentence requires at least one predicate.

Examples
We ate pizza. Love was his only motivation.

In the first example sentence, the predicate is ate, because it is the action that occurs in the clause.

Remember, if a noun takes the predicate, it is the subject; therefore, if a noun is not a subject then it must be an object.

Examples
We ate pizza. I forgot my shoes.

In the first example sentence, the action is ate. Ask yourself, "Who ate?" Since we take the predicate, pizza is an object. Ask yourself, "What does pizza do in this sentence?" You might reply that it gets eaten, but in that sentence it does not get eaten. Pizza was eaten in the sentence, "Pizza was eaten." But in the sentence, "We ate pizza," pizza does nothing. Since it does nothing it is an object.

The predicate in the second example sentence is forgot. Once we find this, we should ask ourselves, "Who forgot?" Since I forgot, I is the subject. Since shoes is a noun in the sentence that doesn't do anything, shoes is an object.

Examples
John and I played a game. I went home and studied.

In the first example sentence, the predicate is played. So we ask ourselves, "Who played?" Of course both John and I played, so the clause has two subjects or a compound subject.

What is the verb in the second example sentence? You might notice that there are two: went and studied. Since the subject I takes both of these predicates, the clause has a compound predicate. 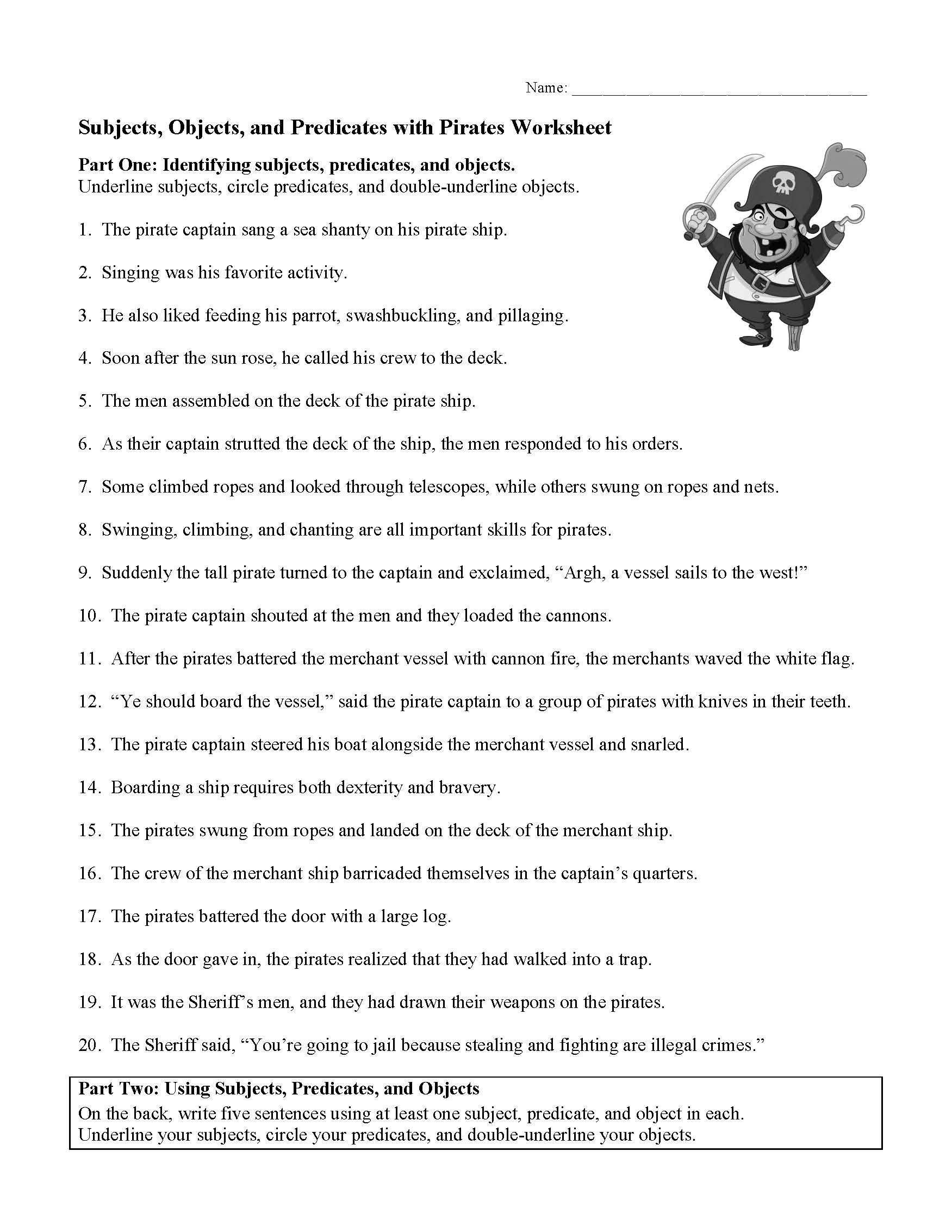 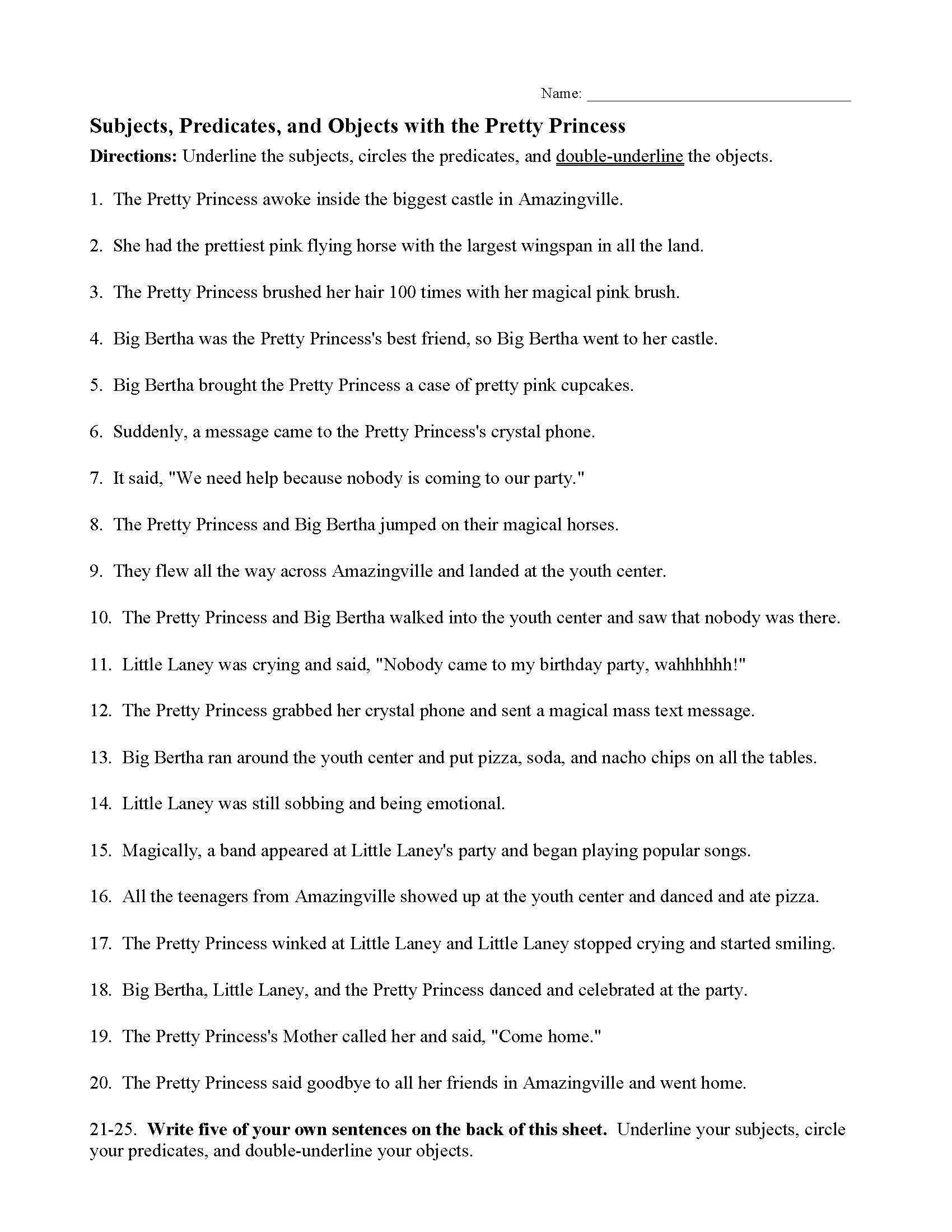 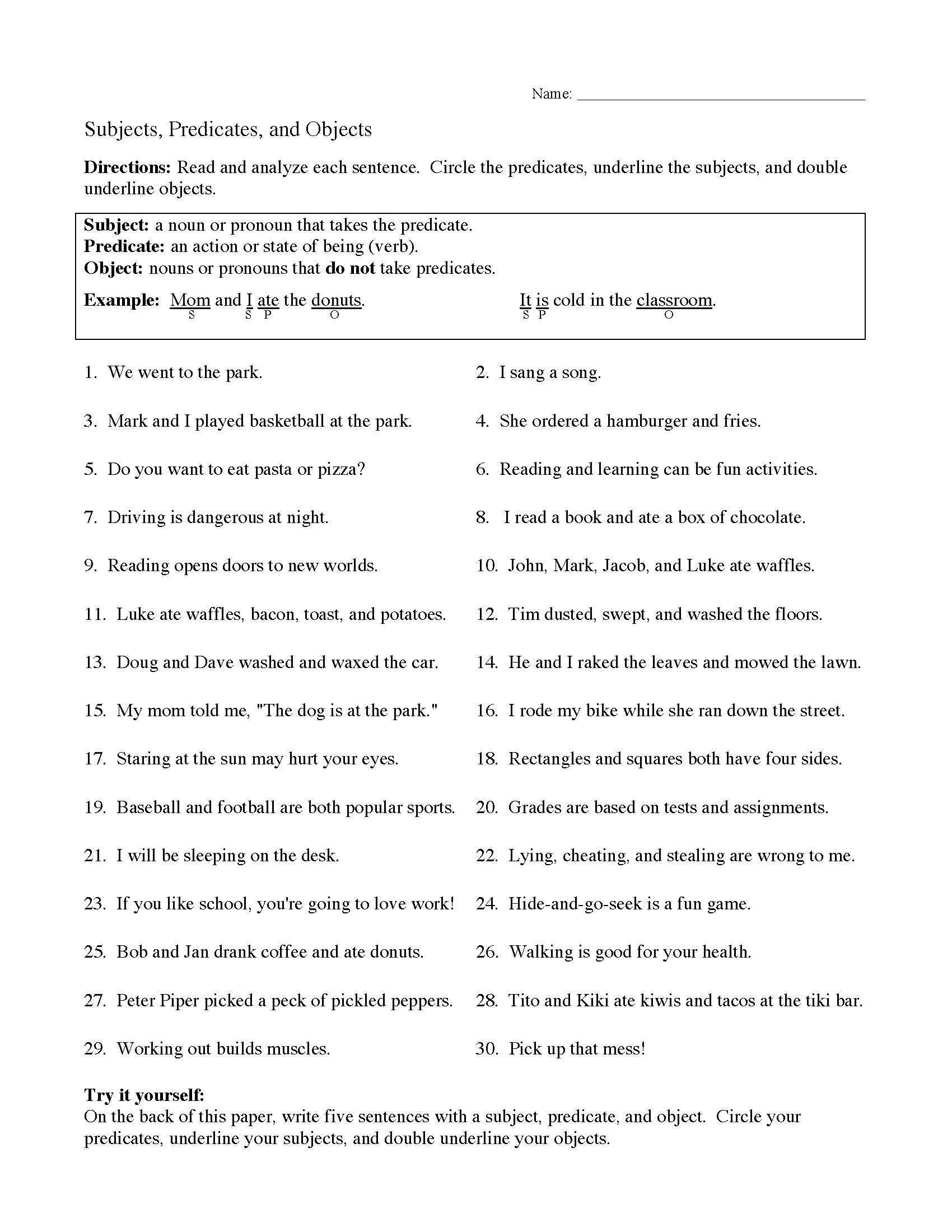 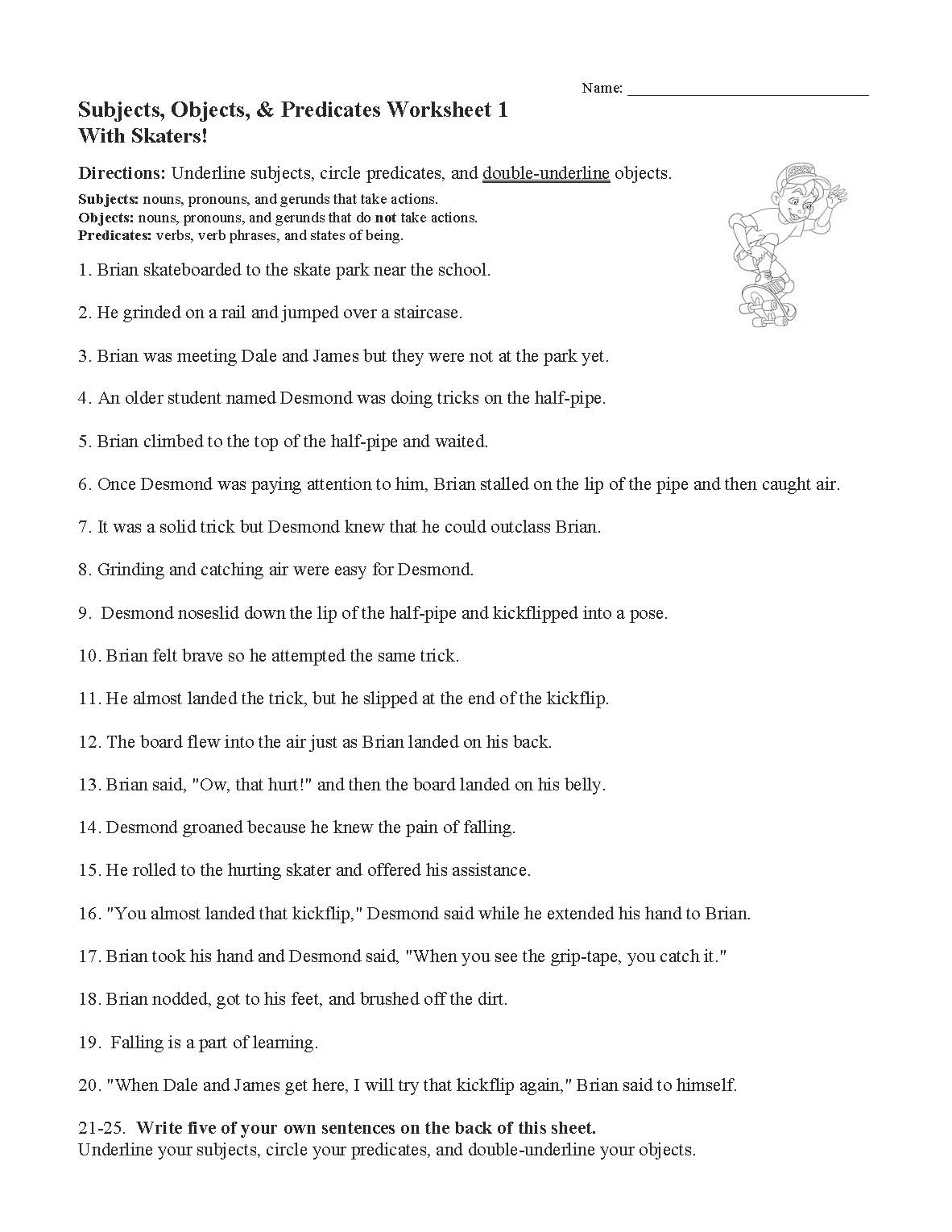 Compound Subjects and Predicates Worksheet
Here's a worksheet to help students identify compound subjects and predictes. Students will underline the subjects, circle the predicates, and determine whether the sentence has a compound subject, compound predicate or both. 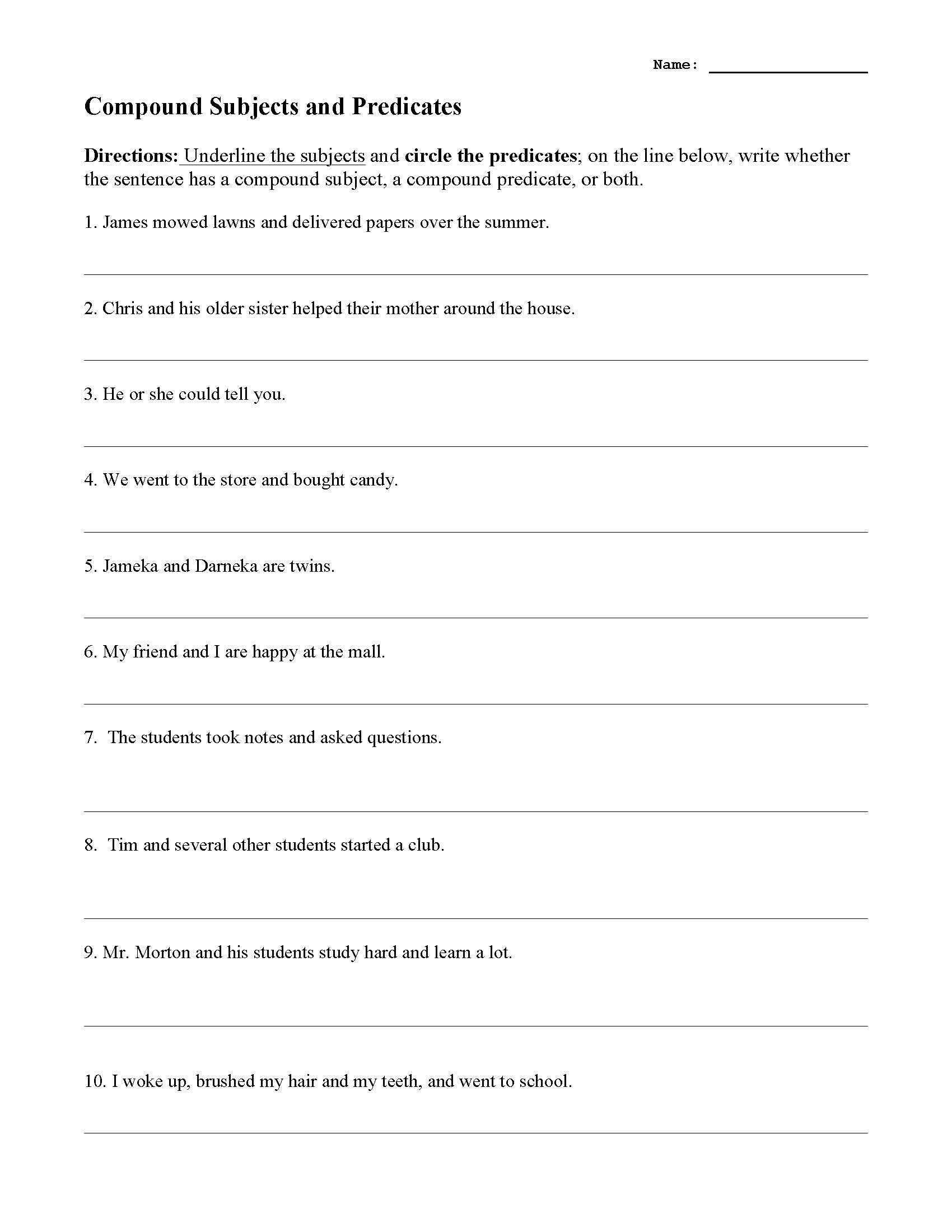 Subjects, Predicates, and Objects Lesson
Here is a slideshow presentation that teaches students the differences between subjects, predicates, and objects. It includes definitions, examples, and a practice activity after the lesson. Check it out! 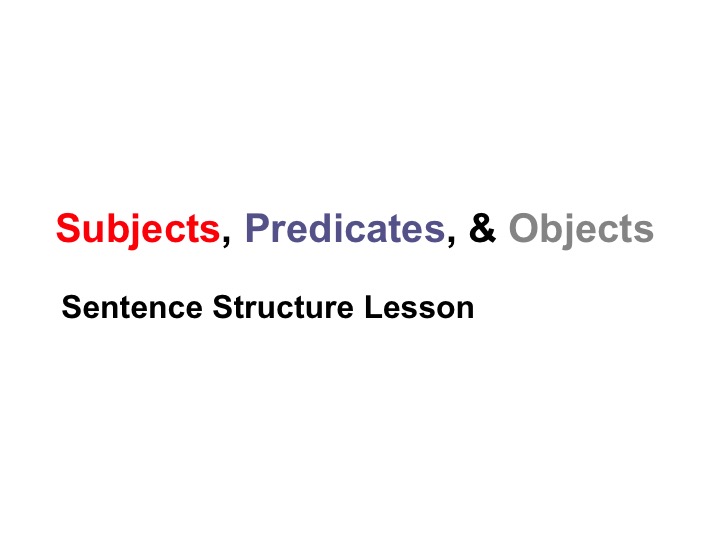 Some Other Useful Pages
Search This Site